Peveril Castle is a ruined medieval castle on a high outcrop of rock above the town of Castleton in the Peak District National Park in Derbyshire.

It was built shortly after the Norman invasion and remained the most important military outpost in the region until the beginning of its decline towards the end of the 14th Century.

The Castle walls retain the shape of the medieval castle, and in places retain some of the height of the fortress.  In other places the walls are pretty much gone, the stone presumably removed over the centuries to build houses and dry stone walls in the local area.

Peveril Castle Keep is a square keep, also in a state of ruin.  English Heritage have done some work in adding a staircase and internal flooring to allow access to the keep, where visitors can get some idea of the internal structure.

From the valley below Peveril Castle, and indeed in the walk up to the main gateway, you can easily imagine what a well fortified castle it must have been in its heyday.

Indeed as you walk around the castle, along the “Secret Valley”, the extremely difficult task of any invading army becomes clear.  The castle is surrounded on all sides by sheer drops and steep hillsides. The most vulnerable part is still separated from the next hill by an imposing drop.  This area was connected by a narrow bridge, protected by the most imposing part of the castle as shown in the model reconstruction below.

Peveril Castle was never assaulted, as far as we know.  Whether that was because of its seemingly impregnable nature, or because it was not in a position to be fought for remains uncertain.

Visitors should be warned that access to the castle is up a very steep hill and may be unsuitable for those who struggle with walking. This former coaching inn has a beautiful location less than a minute’s walk from Peveril Castle, which you can climb to enjoy breathtaking views over the Hope Valley.

Surrounded by the Peak District countryside Ye Olde Cheshire Cheese inn is in the picturesque village of Castleton.

Swiss House B&B is located in Castleton. Free Wi-Fi access is available. Each room has a flat-screen TV and tea and coffee facilities.

Set in Castleton, this holiday home features a barbecue. The property is 34 km from Manchester and features views of the city. There is a dining area and a kitchen. 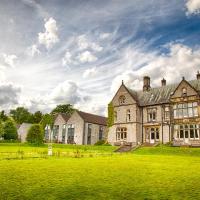 Surrounded by the Peak District countryside, this Victorian gothic mansion is set in formal gardens and 27 acres of parkland.

Mushroom Cottage is a holiday home with a barbecue, situated in Castleton. The unit is 34 km from Manchester. An oven, a toaster and a refrigerator can be found in the kitchen.

Located in Castleton, this holiday home features a garden with a barbecue. The property features views of the garden and is 32 km from Manchester. There is a dining area and a kitchen.

Cheshire House Bed and Breakfast is located in Castleton, 34 km from Manchester and 21 km from Sheffield. Free WiFi is offered and free private parking is available on site.

Set in fine Peak District countryside ideal for walking and mountain biking, this hotel and spa has an indoor swimming pool with views over Win Hill and the Hope Valley.

Peveril Castle is a ruin and is a tough climb for anyone with any mobility problems.

The view from Peveril Castle is fantastic