Tintagel Castle is a place steeped in the myths and legends of Arthurian times.  It was referenced as the birth place of King Arthur in the “History of the Kings of England” by Geoffrey of Monmouth and has retained its mythical status ever since.

It is now a ruined structure close to the town of Tintagel in Cornwall, and lies partly on Tintagel Island and partly on the mainland.

The peninsula and island are incredibly steep sided and rocky, providing an excellent area for defence.  With the addition of walls, both on the island and on the mainland it would have been a formidable structure for any invading army.

There is evidence of habitation in the Roman period, though no actual Roman ruins have been unearthed. Further building went on through the dark ages, but the castle as we see it today was built during the early part of the 13th Century.

While the area is highly defensible, it is also not particularly strategically important and it is now postulated that the medieval castle may have been built because of the Arthurian stories.  By building an “ancient” castle on the site of the Cornish Kings perhaps the owner, Richard, 1st Earl of Cornwall, hoped to gain the trust of his Cornish subjects.

Tintagel Castle did not remain in use for long and the castle fell into disrepair. It became a tourist attraction as the Arthurian Legends grew in popularity during the Victorian era.

Today, Tintagel Castle it is administered by English Heritage and remains an incredibly popular tourist attraction.

As with many historical sites, access can be difficult. 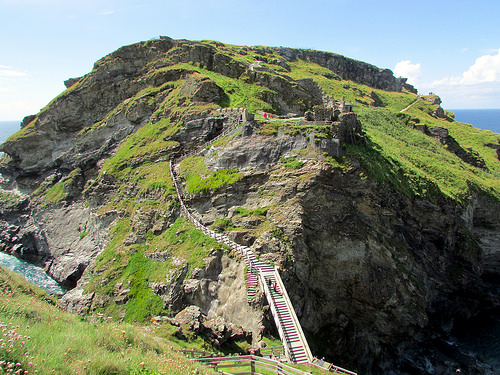